The Honor Associated with Hosting a Kwik-E-Mart Convenience Store

(Mountain View, CA) 7-Eleven spokeswoman Margaret Chabris recently (and astutely) stated: “We’ve done research, and research shows us that our customers like… movies, so we’re getting involved with some major studios on some of their properties this summer.” (This was covered, amongst others, in the venerable Convenience Store News… one of Mr. Laaker’s many, many pulp subscriptions.)

Bringing such insightful words to life, Mountain View (home of one Micah Laaker) is now hosting one of 7-Eleven’s “movie involvements” in the form of a Kwik-E-Mart refitting of their newest store in the area. Serving as a tie-in for The Simpsons Movie, the convenience shoppe’s exterior, signage, employee uniforms, and product lines have been overhauled to match the show’s 7-Eleven-inspired Kwik-E-Mart. 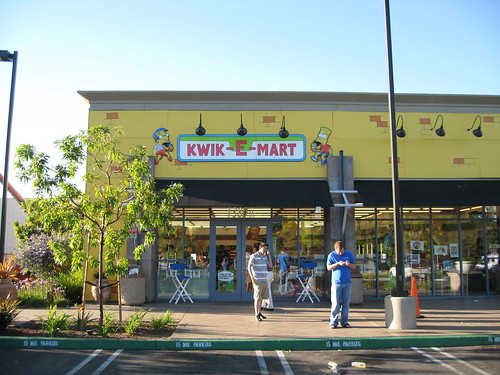 Within minutes of learning that Mountain View was one of 11 nationwide Kwik-E-Mart hostings being unveiled today, Mr. Laaker began devising plans to visit every local 7-Eleven until the winning locale was spotted. (Also, he was hankering for a Super Big Gulp.) Minutes after that, he and wife Carrie were driving just around the corner when he heard her yell, “MART!”

Such shouts could mean but one thing: the “chosen” store was less than a mile around the corner from their home. The next half hour was spent documenting and purchasing such treasured gems as Buzz Cola, Radioactive Man comic books, and the illustrious sprinkled donut of Simpsons yore. Sadly, no Duff Beer was discovered in the coolers. (Images from the store’s opening day are found on Flickr.)

“I’ve heard 7-Eleven’s customers are into movies… I’m into movies, too!” said Mr. Laaker while strolling the aisles of the store (and being cautiously tracked by two store employees uneasy with his camera-documenting ways). “Not surprisingly then, I’m also into The Simpsons and 7-Eleven. Further, I’m into participating in big national marketing events when they’re just blocks away.”

Mr. Laaker then took a dainty bite of his sweet, sweet, delicious donut, and made his merry way home.

RSS feed for comments on this post · TrackBack URI