An Open Invitation to John Schneider

At the request of Laaker.com correspondent J. Sly, Mr. Wopat, “Luke Duke” of “The Dukes of Hazzard” fame, had signed a photo (Ed. – Please see photo at left.) of himself and Schneider, “Bo Duke” of the same fame, with the following personalized message:

Ever respectful of his former “brother,” Wopat only signed his area of the photo, leaving plenty of room for Schneider to follow suit in the appropriate area. Mr. Laaker, while extending this metaphorical favor-asking branch, was noticeably hopeful of the possibility of Schneider signing the photograph.

Having met Schneider at an L.A. celebrity gala in February (Ed. – Please see 03/01/00 release.), Mr. Laaker invited Schneider to step forward and sign the remainder of the photo with a similar message. “Mr. Schneider has a personal interest in seeing this photographic dyptich signed,” said Mr. Laaker today. “This photograph represents the first in a series of celebrity ‘Still Flippin!’ photographs, and Mr. Schneider should be both proud and honored to join Mr. Wopat in this landmark endeavor.”

Mr. Laaker, as yet, has made no attempt to reach Schneider or Wopat for comment. 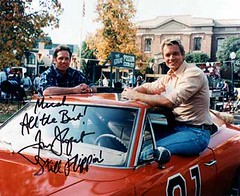