Capturing Important Metadata Should Be Easy

Somehow, I managed to open a debate recently with esteemed colleague and Flash/Flex wÃ¼nderkind Zach Graves about which was the better flash memory card for digital cameras: the Eye-fi Explore 2GB card (mine) or the Kingston one-trick-pony 8GB card

I argued (very convincingly) that uploading photos and geotagging them were for suckers. They are both important tasks, but tasks I had no interest in. “Think how much time you spend downloading photos from your card, uploading them, and geotagging them (and trying to get Flickr to recognize a very clear, accurate address). And then think about 10 others things you could be doing. Including taking other photos,” I said.

Graves countered that tackling menial tasks best left to machines/drones (and the associated slowness and inefficiency) was the better user experience, or so I remember his argument.

Unwilling to leave it at that, I pressed the point: “I’m willing to make a wager. I would propose we each take a picture of the other’s flash memory card, upload and geotag it. The person with all 3 of these tasks accomplished first wins.” Excited about proving his approach, Graves took the bet.

Roughly 30 seconds later, my photo of Zach’s card was live to the world. I took an additional 10 seconds or so to add a title to the image as a courtesy. 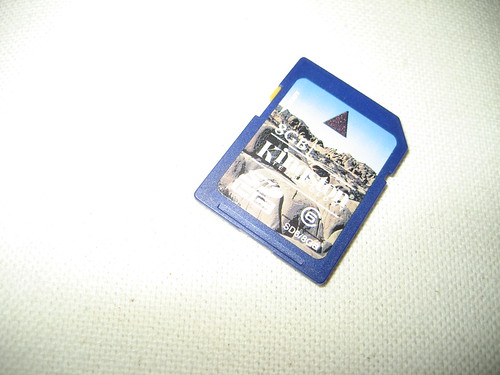 Zach’s photo, however, never even managed to make it up to Flickr. (It should have appeared somewhere between “DAS 5” and the photo of my Yahoo! star.) Somewhere in that long, inefficient chain of tasks described earlier, Graves decided he had better things to do… which was true.

So, the point of this story? Make a good office bet. Listen to a little Kenny Rogers. Curl up with a long-winded but intriguing
H.P. Lovecraft tale

. And, pick up a special edition Eye-Fi 4GB card on the cheap, whose tiny wireless robots will do the job of which the Kingston card (and its owners) could only dream.